Is the London Job Market Fair? Gender and ethnic inequality

Is the London job market fair?  It’s a simple question. But deceptively challenging to answer.  What is fair? And for whom?

Fairness can take many forms.  People with the same role, performing to the same standard, being paid equally.  Or having access to equal opportunities. And being differentiated based on what matters for success, not something.

While not addressing differences between people in the same role, the recent UK gender pay gap reporting demonstrated women were under-represented in high paying jobs.  Would the 2011 census data for London support this conclusion, and are there similar inequalities between ethnic groups?

In short, yes and yes.  By looking at educational qualifications and workforce participation, the analysis demonstrated that in London:

Admittedly the analysis is limited and does not cover the quality of the work, what it is paid and any gaps between the same role.  It also raises a lot of questions that could not be answered by the census data.

Nevertheless, by looking at a few key metrics, it does show distinct inequalities between genders and ethnicities in London.

The recent UK gender pay gap reporting attempted to answer the question of whether pay is fair between the genders.  Overwhelmingly it showed that it is not. In the UK, women are far more likely to work for an employer where, overall, men are paid more.

The main reason?  There are more men in senior roles than women.  In fact, in 82% of companies women are under-represented in high paying jobs when compared to the business as a whole.

Being the first study of its kind in the world, it was not without problems, and the figures are imperfect.  For example:

In a previous post, we reviewed the gender split of London, which found that there are (or were at the time of the census) a relatively equal number of qualified men and women.  Additionally, the census split the highest level of educational qualifications achieved into the following six groups: 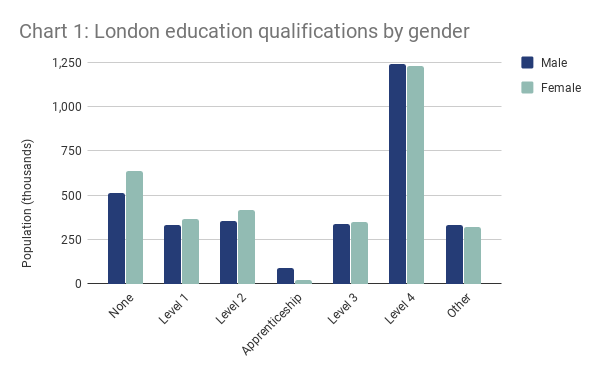 It would be reasonable to assume that someone in senior management would be in the middle to later stages of their career.  Subsequently, we would expect them to be at least in their 30s, although there are always exceptions.

If we were to split the workforce by generation, they would have been the following ages at the time of the census on 27 March 2011: 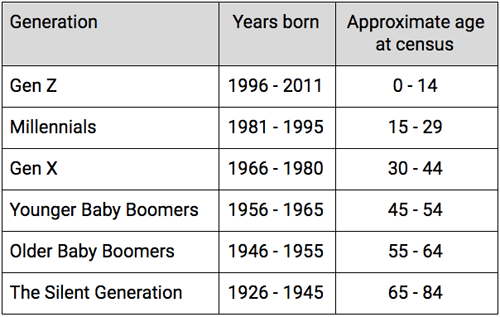 Therefore, we would estimate generation X and the baby boomers, both younger and older, are most likely at the stage of their career where they may hold a senior management position.  As education is often used to determine if someone is capable of performing a role, are there differences in the qualifications held by each gender across generations?

Chart 2 below presents the generational split between level 4 qualifications.  Level 4 represents the highest, and most challenging to attain, educational qualifications, and therefore should be the most susceptible to differences in opportunity.  Furthermore, higher education is often a prerequisite for better paid professional positions, particularly those in the large companies surveyed in the gender pay gap study. 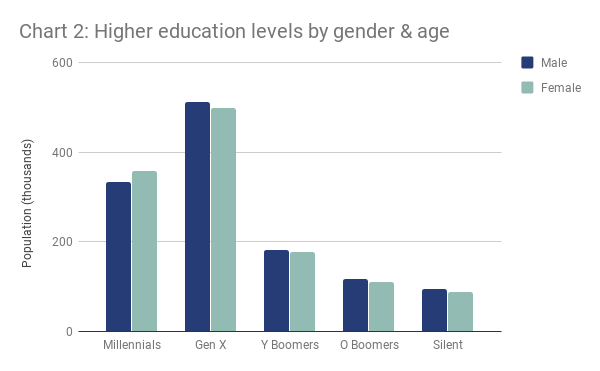 There is very little difference across all generations.  In the ages most likely to hold senior management positions, Gen X and the younger and older baby boomers, the differences between the genders were 2.8%, 2.2% and 6.4% respectively.  By comparison, the gap for Millennials was 7.2% in favour of women.

Although likely to now be retired, the relatively small (8.6%) gap between the men and women in the Silent generation adds support to the conclusion that supply of qualified women is not the issue.  Or at least shouldn’t have been since the class of 1948 graduated.

But what level of qualifications do professionals and senior managers hold?

Qualifications of Managers and Professionals

Helpfully the census includes data on occupations and the levels of education held by people in those positions.  The two occupational categories most relevant to the current study are:

Chart 3 measures the proportion of Managers and Professionals to hold each level of educational qualification and contrasts them against the result for all London occupations. 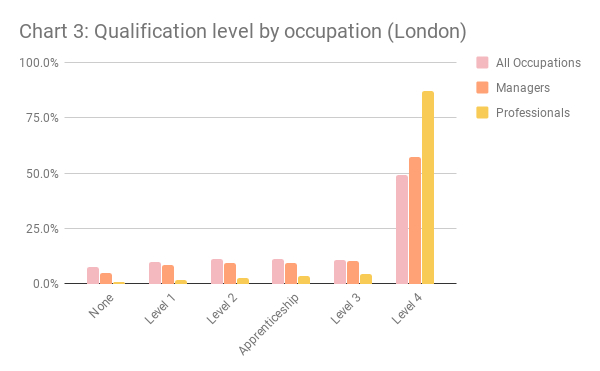 The lower level of higher education, relative to professionals, may, at least in part, be due to the category containing managers, directors and senior officials of companies of all sizes.  It includes directors of small limited companies along with those of FTSE listed companies. As the gender pay gap study consists of companies with 250 or more employees, it is the latter group that is more comparable to that study. 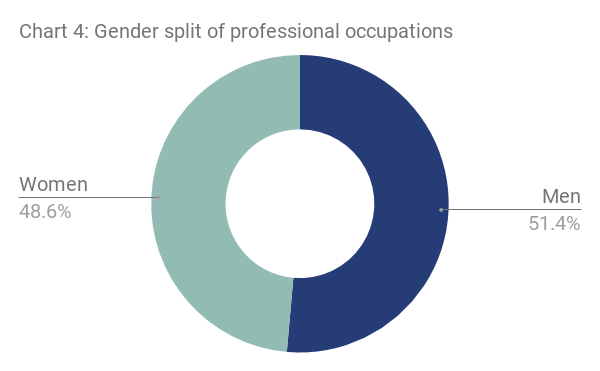 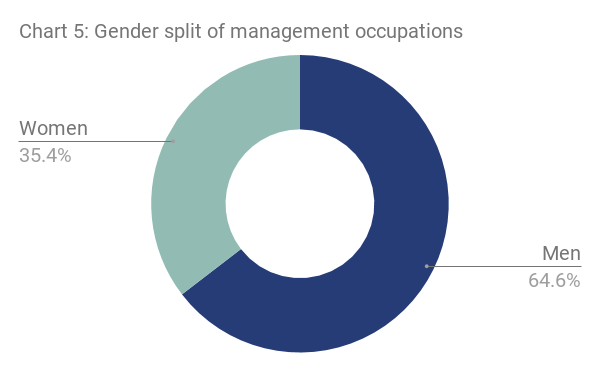 This difference between genders is an insightful finding, but only provides information on peoples’ professions and does not address the quality or amount of work.  Unfortunately, data on the economic activity of each occupation by gender is not readily available in the census data. However, it can be helpful to look at the differences between the genders for London as a whole.

In reviewing the workforce participation of Londoners aged 16 to 64 (chart 6 below), there are three areas of visible difference between the genders: 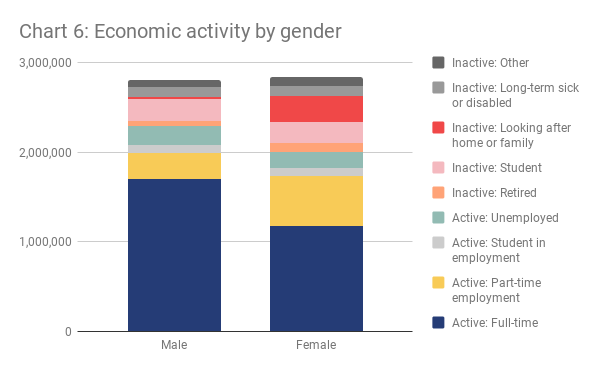 Part of the problem may, therefore, be that women are far more likely to leave the workforce, either wholly or partially.  Ideally, additional information would be available to help answer:

In summary, the findings from the census data support that UK gender gap study: the job market is not fair for women.

Nevertheless, gender is only one differentiating trait of members of the workforce.  Does someone’s ethnicity impact their chances of success in the London job market?

Starting again with educational qualifications, the overall levels held by different ethnicities are similar (see chart 7 below), with a few notable exceptions:

The ‘Other’ ethnic category comprises of Arab people, and any other ethnicities not covered by the other groups.  A full breakdown of the different ethnic types is available here. 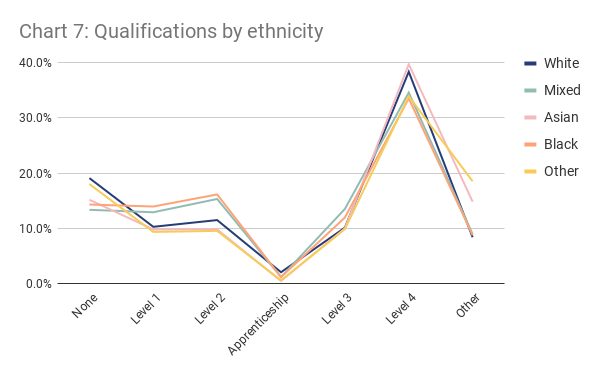 Ethnic Representation of Managers and Professionals 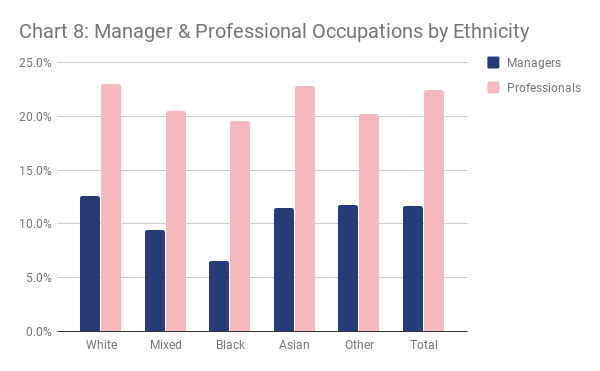 In some areas, the professional occupations data reflects the strong reliance on higher (level 4) education and the rates of those qualifications held by the different ethnic groups.  For example:

Ethnicity and Gender of Managers and Professionals 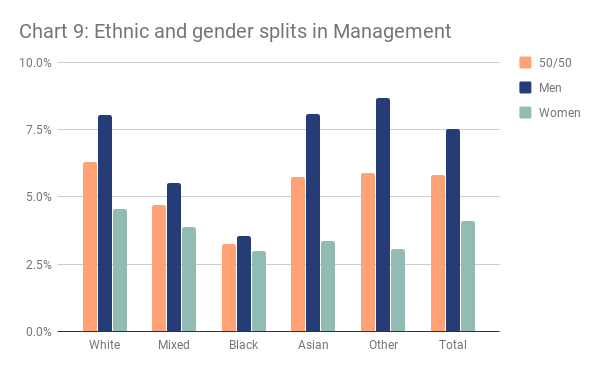 The gender divide is alive and well across all ethnicities.  While it is lowest among black people, any benefit black women may have enjoyed relative to their female peers is eroded by the overall disadvantage of merely being black.  The other key points to note are:

These disparities make for some grim reading, and again, do not cover the quality of the work, or what it is paid.  As before, it may help to review the split of workforce participation to see if it can offer any other trends. 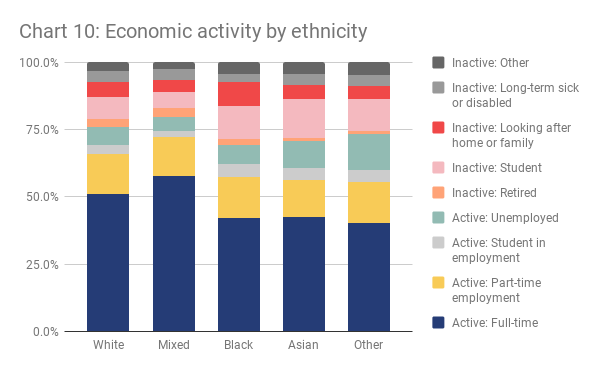 The unemployment rate shows further differences between the ethnic groups (chart 11 below).  The percentage represents the portion of each population that are considered economically active but not in employment.  Essentially people that would like to be working but were not. The unemployment rate in 2011, at the time of the census, was 8.9% for all of London, which is higher than the current level of unemployment. 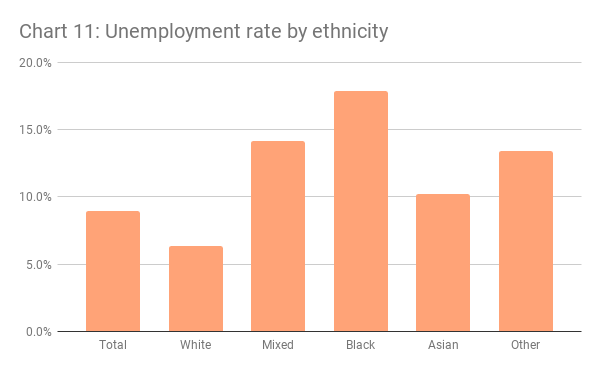 The next closest group were Asian people, who were still 60% more likely to be unemployed than white people.  The disparity grows from there, as:

The London Job Market is Not Fair

Through conducting a rather straightforward analysis of educational qualification levels and workforce participation, the census data highlighted inequalities between genders and ethnicities in the London job market.

Ideally, further analysis will cover some of the issues in more depth, in particular, the quality of the work, what it is paid and any pay differences between people in the same role.