Gendered Language - Are your job ads turning women away?

Your request to hire a new team member was approved.  Now you need to find the right candidates.  You have the job description so it should be a simple cut and paste for the job ad.  Shouldn’t it?  Or can the words in the ad impact who applies?  Are all words equal, or are some better than others?

Researchers from Waterloo and Duke Universities wanted to know if the words used in job ads impacted the number of men and women applying.  They found that they do and that women are more susceptible to gendered words.

By understanding the study and its results, we can easily reword job ads to target an equal balance of male and female applicants.

The Gender of Words

Unlike many other languages, English has very few words with a clear gender.  Aside from the pronouns, ‘he’, ‘she’, ‘him’, ‘his’ and ‘her’, most of the gendered words we use to refer to family and jobs.  For example; ‘niece’ and ‘nephew’, or ‘waiter’ and ‘waitress’.  However, for jobs, it is becoming more common to use the male version for both men and women.

While English words may not have a gender, we can react to words differently based on our experience, beliefs and stereotypes.  Often this leads to us associating a job with a particular gender.  Which gender do you picture in your mind as a fire-fighter, nurse, pre-school teacher or builder?

Interestingly, these roles are not set and do change over time.  In the 1950s, when occupations in computer hardware and programming were in their infancy, women, such as Grace Hooper, played a crucial role in the invention and development of programming languages.  Consequently, as late as the 1960s, many people thought of computer programming as a natural career choice for savvy young women.  A stark contrast to the male-dominated field we see today.

While these stereotypes can result in unconscious bias, what other factors in a job ad can impact whether men and women will apply for the role?  Danielle Gaucher and Justin Friesen from Waterloo University, and Aaron C Kay for Duke University set out to find the answer.‍

Gaucher, Friesen and Kay began by looking at previous research into how men and women use language differently and how this results in us perceiving certain traits as being male or female.  Two common examples are that men are good leaders, and women are thought to be more communal.

Subsequently, our language changes depending on which gender we refer to, with some words used more often to describe men than women, and vice versa.  Over time, these words become linked to a specific gender.

In their experiments, Gaucher, Friesen and Kay wanted to see:

The first part of the study reviewed the use of gender-themed language in two random sets of job ads (the appendix includes a list of the target words):

In both cases, the researchers found that job ads for male-dominated jobs or faculties were more likely to contain masculine-themed words.  By itself, this was not too surprising since the words used may merely reflect the fact that the jobs were considered male jobs.  Therefore, the authors of the job ads may have unconsciously written them for men since this was the stereotypical audience.

For this explanation to be correct, we would also expect to see the same pattern for female-dominated jobs.  As the roles are perceived to be for women, the job ads should contain more feminine-themed words.

However, this did not occur.  In all job ads, the number of feminine words used was constant.  Consequently, the use of gender-themed words was not due to the type of job and whether it was usually considered male or female.‍

The Effects of Gendered Words in Job Ads

In the second part of the study, Gaucher, Friesen and Kay ran three lab experiments to test whether the presence of gender-themed words in an ad affected how appealing a job was to men and women.

For the first experiment participants were asked to review a series of job ads and guess the gender diversity.  The ads were loaded with either masculine or feminine words to test the effect of gendered language.  The results found that people thought there were fewer women in jobs advertised using masculine words.

The second experiment used similar job ads to investigate if the presence of gendered wording affected how appealing men and women found the job.

Overall, the women in the study preferred the jobs with feminine wording.  Perhaps surprisingly, this was true for all the jobs ads, including those for male-dominated roles.

Furthermore, women reacted negatively to jobs written with masculine words.  Again, this was true for all roles, including those generally associated with women.

Given the findings of the second experiment, the researchers wanted to assess if other factors may have impacted if a job was considered to be attractive.  Specifically, did women find a job more, less or equally desirable based on whether they thought they had the skills needed for the job.

Gaucher, Friesen and Kay thought that in changing the job ads, without meaning to, they could have altered the nature of the role, and the skills people believed were needed.  They also thought that if the woman reading the job ad felt unqualified, she may rate the job as less appealing.

Unlike the first two experiments, the final test focused solely on women.  The high-level results were consistent with the second experiment in that women found masculine coded job ads less appealing.

Importantly, they also found that the gendered wording did not change whether the woman reviewing the ad thought that they could do the job.  Therefore, the researchers were able to conclude that it was the presence of gendered words that made a role more or less appealing to women.

From Gaucher, Friesen and Kay’s findings we can see how gendered language in job ads can impact whom the role will appeal to, and if they will apply:

Findings of the Study

From their study, Gaucher, Friesen and Kay concluded that:

The researchers also noted some limitations with their study and areas for future research.  Notably, they did not assess whether some words had more impact than others.

Additionally, the ads they created for the experiments contained 7-8% gender-themed words, which was higher than in the average real job ad.  Ideally, they would have tested if the proportion of gendered words impacted the results.‍

How to Attract Both Genders

From the study, gender-themed words impact women more than men.  Therefore, limiting their use, or at least writing a neutral job ad could help attract an evener number of men and women.

Improving the balance of gendered language in job ads can easily be achieved by: 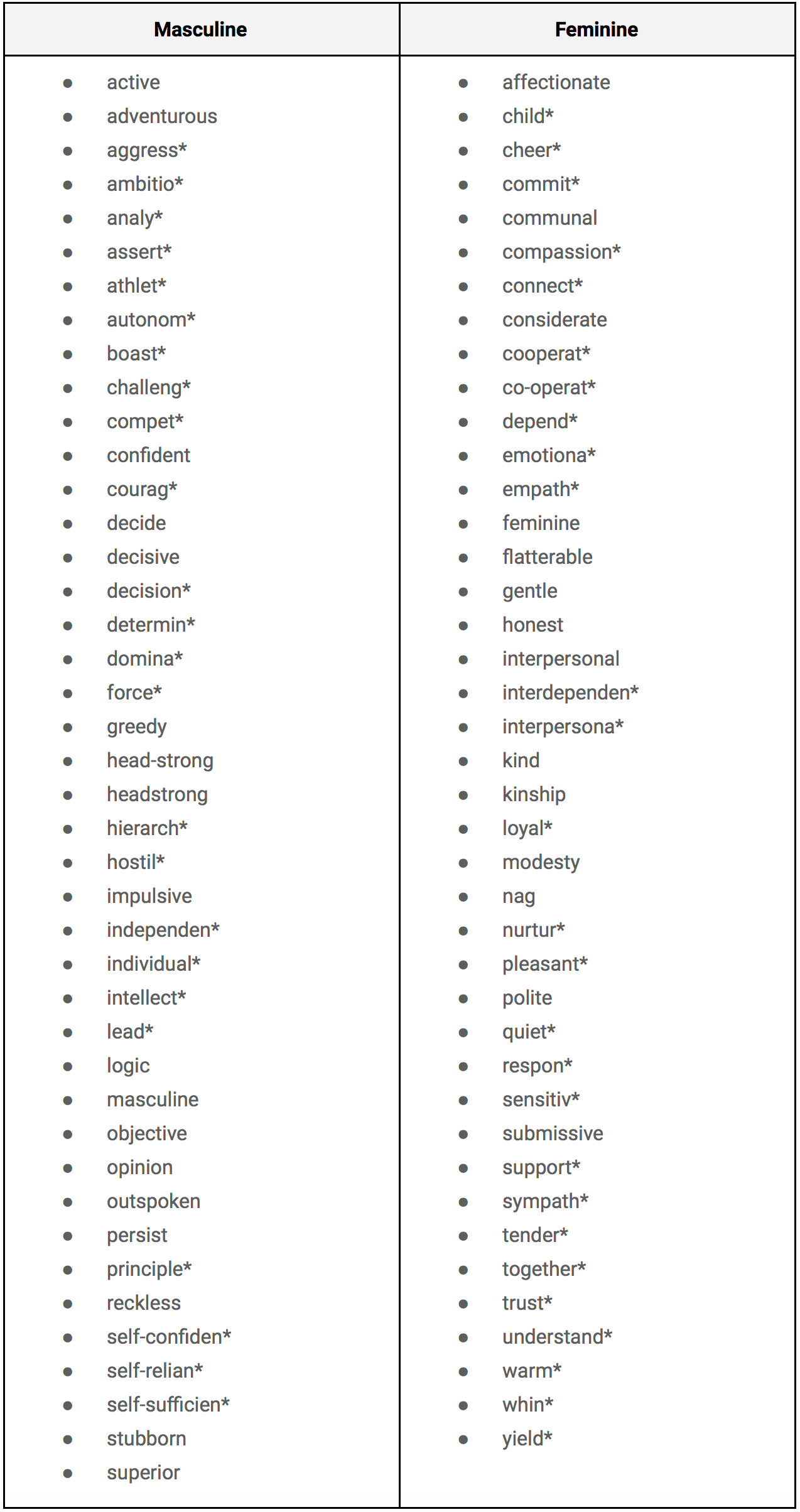