Bias in Your CV - Why You May Not Be Getting Interviews

Applying for a job sometimes feels like dropping a coin in a well. There is a wish, but aside from a distant splash, or email receipt, no indication that you were heard.

On the other side of the equation, the volume of applications can be overwhelming.  Merely finding the qualified candidates can be a monumental task. Moreover, in the pressure of sorting through the pile of CVs, despite best intentions, can unconscious bias impact who gets called for an interview?

In this article, we explore what your CV may inadvertently be telling the reviewer about your gender, ethnicity, age and class, whether this can lead to bias, and if so, what can be done by the reviewer to limit its impact.

Given all the focus on gender equality, one would expect there to be no difference in the response rates for two candidates identical in every aspect except for their gender.  Yale researchers assumed there would be no difference when they set out to study if science faculties exhibited any gender bias when assessing students.

In the 2012 study, the researchers created a fictional student that applied to science professors at top universities in the United States.  The professors were asked to evaluate how competent the student was, how likely they would be to hire them, how much they would pay and how willing they would be to mentor the student.  All of the applications were identical, except that half were a male applicant, John, and the other half were for a female applicant, Jennifer.

The results showed that both male and female faculty members at the universities sampled were biased towards the male student.  Alarmingly, in every category tested there was bias against the female student: 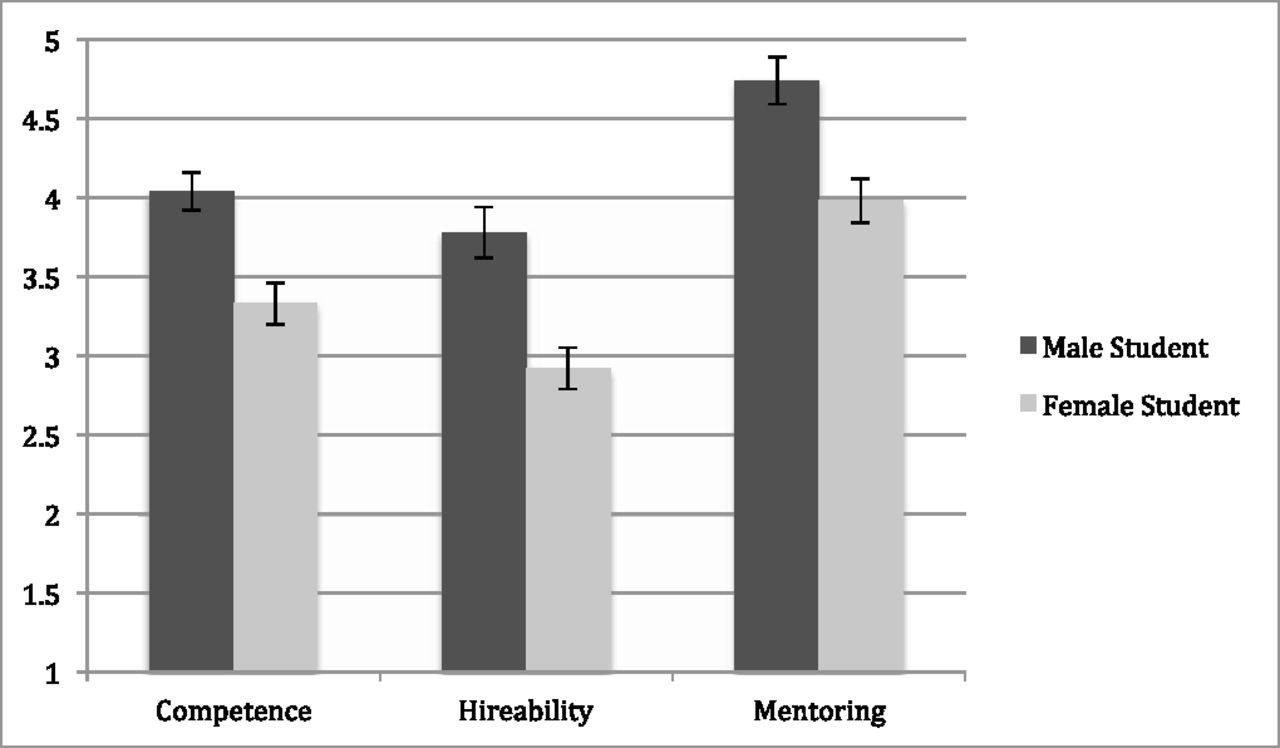 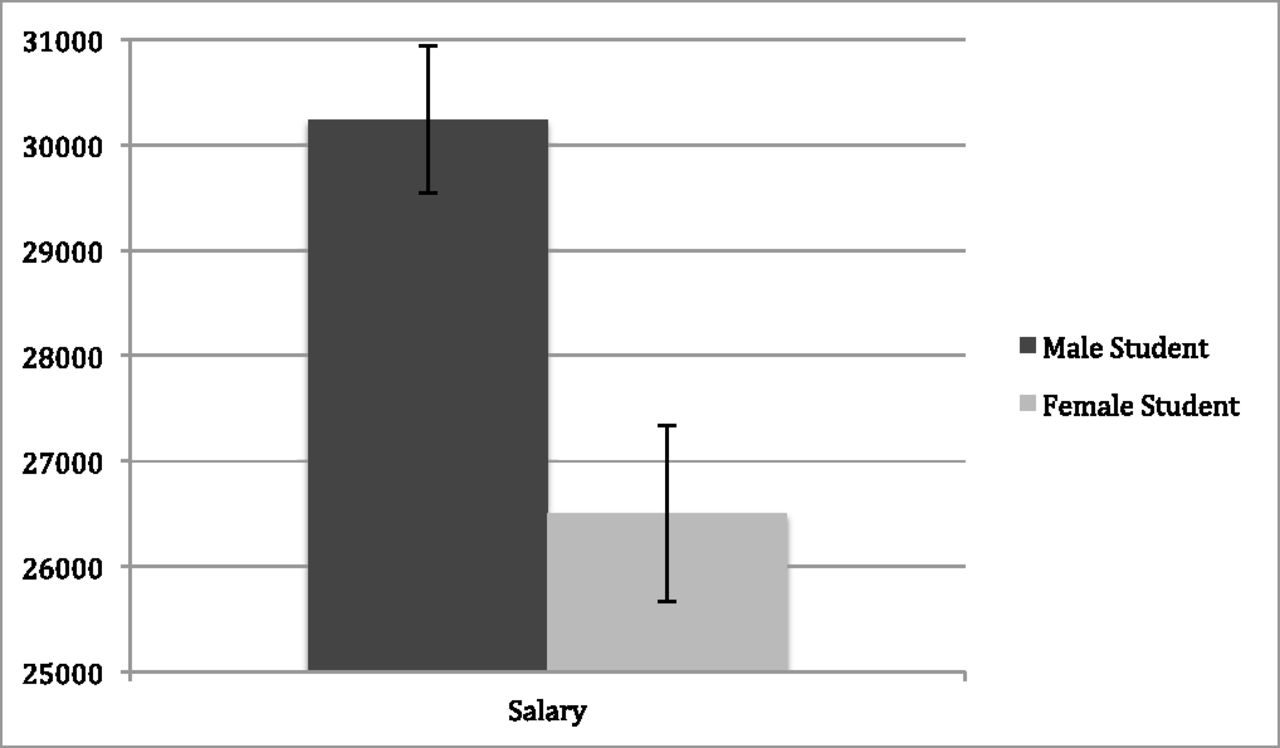 Indicators of Gender on a CV

If you have a Western name that isn’t androgynous, the reviewer will be able to deduce your gender.  Moreover, if your name is foreign, depending on their familiarity, they will likely know your gender.  Additionally, your CV could be subjected to ethnic bias.

There have been many studies on the impact of an ethnic or foreign name on the likelihood of job applicants to be invited for an interview.  The reviews all followed a similar format, whereby the CVs were effectively identical in all aspects except for the name.

In the UK, a 2009 Department of Work and Pensions study found that white applicants received a positive response from employers 68% of the time, whereas ethnic minorities received positive responses only 39% of the time.  Furthermore, they found that ethnic minorities would need to send 74% more applications to achieve the same level of success as their equally qualified white counterparts.

Indicators of Ethnicity on a CV

Aside from your name, your ethnicity can be indicated by:

A 2017 study investigated whether older job applicants benefited from removing clear age signals from their CV, such as their date of birth, or whether subtle age cues, like older-sounding names or old-fashioned extracurricular activities, impacted their likelihood of being hired.  The experiment surveyed 610 HR professionals and found discrimination of older candidates based on implicit age cues on their CVs.‍

Indicators of Age on a CV

As mentioned in the study, aside from date of birth, many subtler signs of age may be present on a CV:

Recently, the UK MP Justine Greening ignited the class debate when she advised employers to look more sceptically on the CVs of public school boys.  She reasoned that when grades are equal, a job candidate from a challenging background would be more impressive than a candidate from a privileged background.  The reasoning behind this is that context matters, and achieving equal results with fewer resources is a more significant achievement.

The evidence supports Ms Greening’s argument, as English researchers found that state school leavers were outperforming their private school educated peers in their final degrees.  However, what happens when these students apply for a job, are they treated equally?

A US study investigated the impact of class on the rate of success in applying for real summer internships at top-tier law firms.  Such placements are often a precursor to lucrative jobs, and the researchers were interested to see if the US values of individual effort and ability were more important than family lineage.  The study reached two key conclusions:

Even though all educational and work-related histories were the same, employers overwhelmingly favoured the higher-class man.  He had a callback rate more than four times of other applicants and received more invitations to interview than all other applicants combined.  However, most strikingly, he did significantly better than the higher-class woman, whose resume was identical to his, other than the first name.

While there is not a similar study, anecdotal evidence would suggest that the UK’s acute class awareness would produce the same results.  For instance, a Social Mobility Commission report found that managers assessing investment banking candidates placed equal importance on the person’s speech, accent, dress and behaviour as their skills and qualifications.‍

Indicators of Class on a CV

One’s socio-economic status, or class, will not necessarily be immediately apparent on a CV, but the reviewer can ascertain it from areas such as:

The Impact of LinkedIn Profiles

A picture is worth a thousand words and a profile picture can inadvertently result in unconscious bias in the reviewer.  This response raises questions about the increased use of LinkedIn in recruitment processes, and whether the prominently featured profile photo may indirectly influence whom recruiters contact.

Consequently, while the candidate and the hiring manager will need to meet at some point, there would be clear advantages in delaying visual assessment and the subsequent biases it invokes.

Although there is no perfect solution to overcoming unconscious bias, there is evidence to support the benefits of blind reviews.  As the name suggests, blind reviews eliminate personal details so that the reviewer is focused solely on judging what matters.

The most famous example is the use of blind auditions by the top five US symphonies.  Beginning in the 1970s and 1980s, candidates performed on stage, hidden from a jury by a screen.  Without any knowledge of who the candidate is, or what they look like, the panel can only judge on how well they play.

This simple step makes it 50% more likely for women to advance to the final rounds of the interview process and has been demonstrated to be the source of the increase in the number of women being offered positions.  In the five symphonies the proportions of women have increased from:

The same principle applies to CVs.  By eliminating areas susceptible to bias, such as the candidate’s name, years graduated, address, extra-curricular activities and other signifiers, the reviewer can focus on each candidate’s skills, knowledge and experience, and more objectively assess whether they will succeed in the role.

What’s in a name?

Clearly a lot.  In an instant, your name and other subtle points on your CV can indicate your gender, ethnicity and even age.  All of which, along with your perceived class, can impact your chances of receiving a job interview. Additionally, the popularity of LinkedIn in the recruitment process may exacerbate these biases.

So, what is the answer?  It begins with identifying areas for potential bias, and where they arise when selecting candidates to interview.  And then trying to reduce their impact, through the use of blind CV reviews, to get a better result for everyone.